news directly from the europe RED WING SHOES central: 3 new RED WING SPECIALS just arrived. RWS says: “After a successful launch in Japan, three special pairs of boots will be sold exclusively at Red Wing Shoe stores in Europe this fall/winter season. This special launch consists of two 8“ Round Toe’s and a Steel Toe Engineer. First released in 1955,  the Round Toe with style number #708 was initially developed for work. So, considering that Red Wing’s work boots were originally made with heavy cork soles, the lightness of the lightweight cushion crepe sole surprised many workers at that time. The #2940 uses the 708’s leather from its latter period, Oro-Russet. #2941 uses Dark Chocolate “Cache” which is similar to the 708’s leather as presented in 1955. The 2972 steel toe Engineer boot, originally designed for train engineers,  is a true heavy-duty boot. It comes in Copper Rough & Tough leather, on an oil resistant neoprene cord outsole and protects your feet with a steel toe cap. These 3 exclusive pairs of boots are available in Red Wing’s Stores in Amsterdam, Berlin, Frankfurt and Hamburg.”
i love the fifties round toe work boot style most. kami, please take away a #2940 in 9.5D for me! thx.
pics | RED WING HERITAGE EUROPE 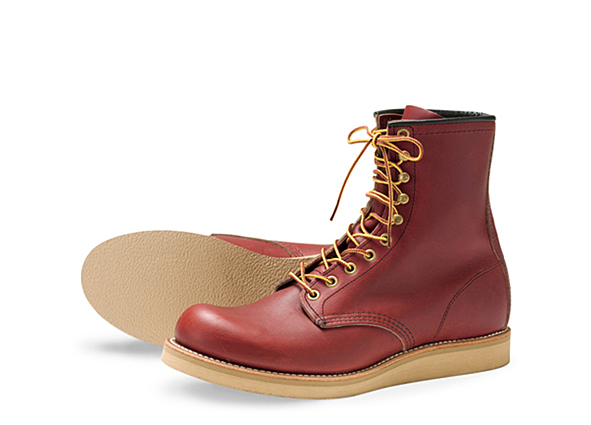